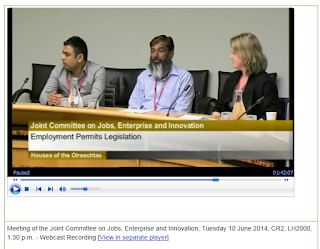 I have previously blogged about the Muhammad Younis case.

In a surprising development yesterday, the Supreme Court upheld Mr Younis's appeal which means that he is now entitled to his award of more than €91,000 (see Irish Times report here).

As Liam Thornton explains on humanrights.ie, Mr Younis won on the grounds that the High Court had exceeded its jurisdiction in reviewing the merits of the case.

The full Supreme Court decision is available here.  The decision was written by Murray J. (Hardiman J. and Mac Menamin J. concurring).  Mr Younis was supported in his case by the Migrant Rights Centre of Ireland.  Amnesty International made a submission as amicus curiae.

The Supreme Court's views about illegality and employment contracts

While the Supreme Court did not deliver a decision on the merits of the case, it did make strong statements about illegality and employment contracts.  These statements are not a binding part of the case (they are obiter dicta) but they still carry persuasive weight  and may influence future cases.

At para. 52, the court states: "Traditional judicial dicta, in the older cases in particular, may have to be reviewed or nuanced in the light of the modern regulatory environment, and applied with the principle of proportionality in mind."  (see the fuller quote in Liam's post).

I would, however, add, even though it is entirely hypothetical, that if the subject matter of the liability to be enforced involved something which was inherently immoral or inherently against the public interests, such as an agreement to rob or to distribute the proceeds of a robbery, then the issue of illegality and public policy would arise from a different perspective. Obviously, that is not the case and unlikely to be the kind of thing which would be attributed to a Rights Commissioner by statute to decide. In this case one is dealing with an inherently lawful subject matter, namely, the relationship of employer and employee, a relationship which the Rights Commissioner, in his Determination, found to exist and give rise to a liability of the applicant. Again, there was no appeal or judicial review of that decision.

So the court is saying firstly that older cases about illegality (which Hogan J. had relied on in the High Court) may need to be reconsidered and secondly that contracts of employment are normally inherently lawful; they are very different from a robbery contract.  The context for the second point is important as it seems to suggest that Judicial Review might be available for a case where a contract was of an inherently immoral nature, but not in the case of an inherently lawful employment contract.  This statement does not preclude further actions concerning illegality of employment contracts provided those actions take forms other than Judicial Review of enforcement proceedings.

The technical issue on which the appeal succeeded

With the benefit of hindsight, it is strange that the case got this far without this technical point succeeding.  To explain the point briefly:  A Rights Commissioner decision was made to award compensation to Mr Younis.  This decision was not appealed or Judicially Reviewed (there appear to have been delays and the time limits are short).  Mr Younis then brought enforcement proceedings (not an appeal) to the Labour Court.  The employer (Mr Hussein) sought judicial review in the High Court of the enforcement decision.  The High Court reviewed the merits of the case, based on the perceived absence of a work permit (although there was not a finding of fact by the Rights Commissioner or Labour Court on this issue), and quashed the Labour Court decision.  The Supreme Court held that the High Court did not have jurisdiction in a judicial review of an enforcement decision to review the merits of the case.

The lessons for the legal community are clear:
(1) Watch out for time limits; if you do not abide by a time limit for an appeal or judicial review you may be left without a remedy.  Some time limits are very short, e.g. six months for many employment law matters.
(2) Scrutinise the jurisdiction of a court carefully and revisit the issue of the court's jurisdiction constantly.  Even if the High Court decides the case as if it has jurisdiction, the issue can be revisited in the Supreme Court.

This is the second in a series of Irish Research Council-funded seminars being run by Prof Ivana Bacik (TCD) and Dr Mary Rogan (DIT), seeking to explore the relationship between legal action and social change. The seminar will begin at 11am promptly, registration from 10.30am. Tea/coffee and lunch provided.