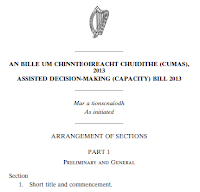 The new Assisted Decision-Making (Capacity) Bill 2013 was finally published on 17 July.  This Bill has been a long time in development; previously Heads of a Bill had been published in 2008 but this is the first formal Bill published on the topic.

The Bill is a product of the Department of Justice and Equality, while mental health legislation such as the Mental Health Act 2001 is produced by the Department of Health.  It is unfortunate that joined up thinking between government Departments is difficult, because at times Departments work in silos without detailed enough reference to each other (and I know, universities are indeed  the same).

The Bill has already been the subject of a good deal of summary and commentary, and I include a list of useful links to other blog postings, etc., at the end of this item.

The following main points strike me as the discussion on the Bill commences:

There is no explicit reference to "best interests" and this is a major advance on the 2008 Heads of the Bill.  The "best interests" principle has been interpreted in such a paternalistic manner by the Irish courts that it would have been unworkable in the Capacity Bill.  What's more, it's out of step with modern thinking on the Convention on the Rights of Persons with Disabilities (CRPD).

The CRPD is explicitly recognised in the functions of the Public Guardian (s.56).

It is a real pity that the Bill does not establish multidisciplinary tribunals for dealing with applications regarding lack of capacity, etc.  A three-person tribunal similar to the Mental Health Tribunals would be a more suitable forum than the Circuit Court for resolution of these issues.

The Bill does not fully resolve the issue of people who lack capacity and are admitted to a residential centre on a "voluntary" basis but are de facto detained in the centre.  This is an issue which arises in the mental health context (and is being addressed by the Steering Group on the Mental Health Act) but also in other residential settings such as nursing homes, social care institutions and centres for people with disabilities.  Ireland is not directly tackling the problem of the "Bournewood gap" and ECHR case-law such as H.L. v UK; Stanev v Bulgaria; D.D. v Lithuania and other cases.

The Bill creates forms of substitute decision-making, most clearly with the court appointment of a Decision-Making Representative (ss.23-27).  Because of Article 12 of the CRPD (which Ireland has not yet ratified), regimes of substitute decision-making should be avoided as much as possible and this Bill may not go far enough to comply properly with the CRPD (for more detailed critique on this aspect see blog posts by  Eilionóir Flynn and Lucy Series).

The Bill does not provide for automatic legal representation in any category of case.  Instead, the person will need to apply for legal aid through the civil legal aid legislation.  This contrasts sharply with the automatic representation under the Mental Health Act 2001.

The rules on informal decision-making (ss.53-54) need to be much tighter as there is a real danger that these will be abused in practice.  The experience with the interpretation of the definition of the word "voluntary" in the Mental Health Act 2001 shows that sections of this kind can have major unintended consequences.

Existing wards of court will not have their cases reviewed for a period which may take as much as three years (see s.35).  In the case of children, this period may (in theory) even be longer.

The Public Guardian will be appointed by the Courts Service (s.55).  The Minister for Justice and Equality will need to approve the Office of Public Guardian's codes of practice (s.63(5)).  It would be better if the office were renamed to replace the paternalistic word "guardian".  In addition, perhaps the office should be on a more independent basis, like an ombudsman or other independent office.

It would be helpful if the Bill included a requirement that the courts provide written reasons for all of their decisions, and that these reasons be published on an anonymised basis.  This would provide real  transparency for the public, legal practitioners and civil society.


OTHER MATERIAL ON THE BILL

Posted by Darius Whelan at Thursday, August 01, 2013 No comments: